Follow my step by step instructions to create a delicious Apple Cranberry Pie Recipe. This is a two crust pie. Add a layer of tart to your apple pie with the addition of fresh cranberries. I started with my easy pie crust recipe and inspiration took over from there. 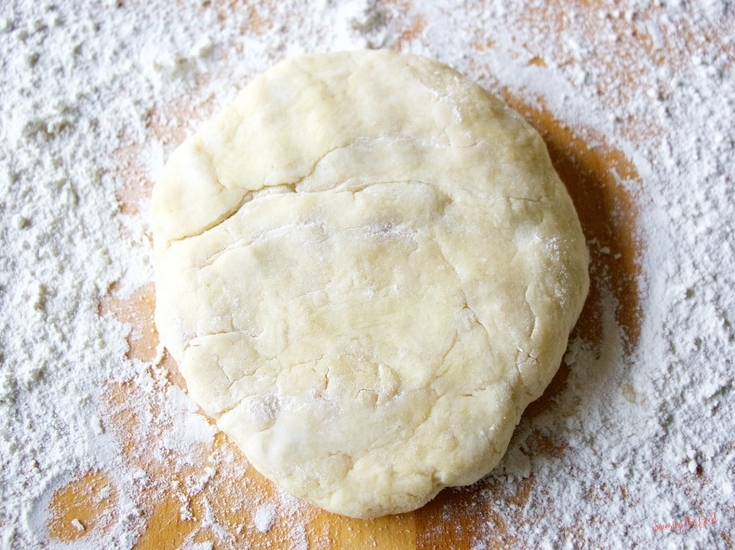 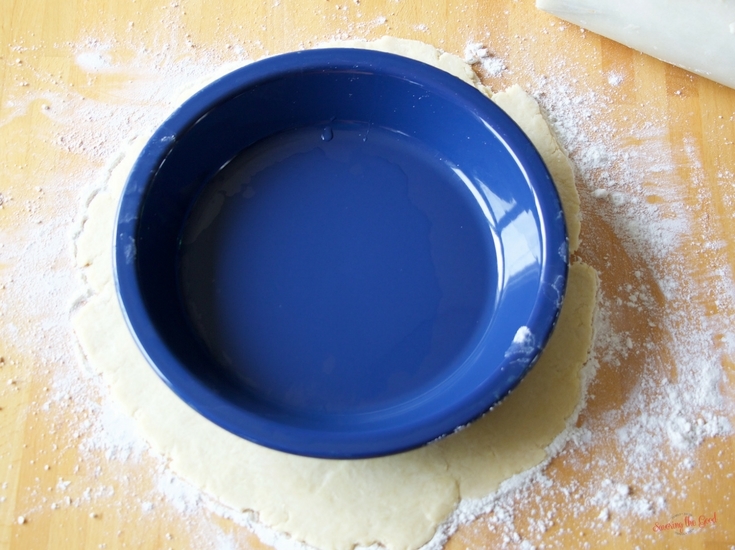 Thank you to Ocean Spray for sponsoring this blog post. All opinions are my own.

As an Amazon Associate and member of other affiliate programs, Savoring The Good, LLC may earn from qualifying purchases.

Nutritional facts are just estimates. Please utilize your own brand nutritional values to double check against our estimates.

Don't have Pinterest? Leave a comment below about this recipe and give it some stars by clicking the stars in this recipe card up above.

The Ocean Spray® cranberry bog was back in Rockefeller Center® on September 22 to kick off the first day of fall in celebration of America’s favorite fruit! This year marks the bicentennial of the first cultivated cranberry harvest and we got to learn the cranberry’s amazing story of taste, health and heritage in a fun and fruitful way. Stay tuned for my Apple Cranberry Pie Recipe.

It was a fun afternoon filled with learning, tasting and interacting with cranberry growers that were there to represent the over 700 grower families in the Ocean Spray® cooperative. 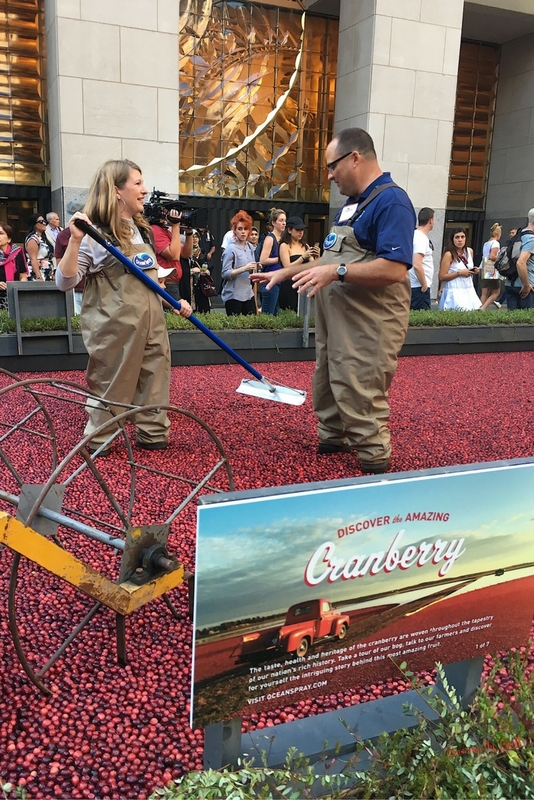 I had the pleasure of chatting with Stephen Lee IV of Tabernacle, NJ when we were in the bog. Stephen is a sixth-generation cranberry grower located in the heart of the New Jersey Pinelands. Stephen began working full-time with his grandfather, uncle, and father on the cranberry farm in 1999, after a career in hospitality. Today, Stephen manages the day to day operation of Lee Brothers, Inc. with his parents. 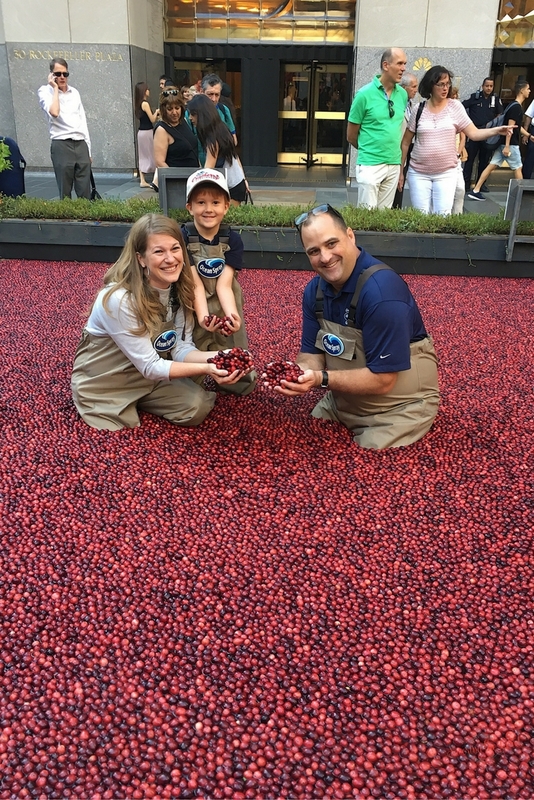 Stephen and I had a great conversation about his farm in New Jersey and how receptive people have been to the Ocean Spray® cranberry bog in Rockefeller Center® plaza.

Every farmer that I talked with was incredibly friendly and knowledgeable about their business. When you are passionate about the product you produce, it shows!

A fun video showing you our entire adventure: 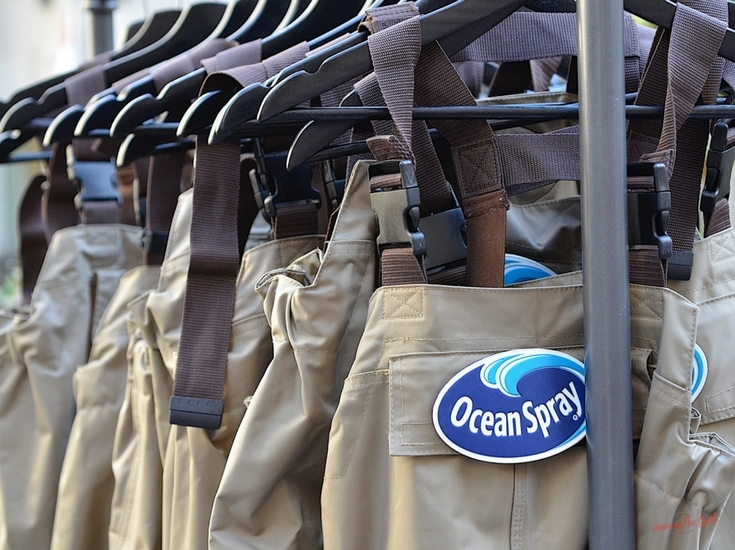 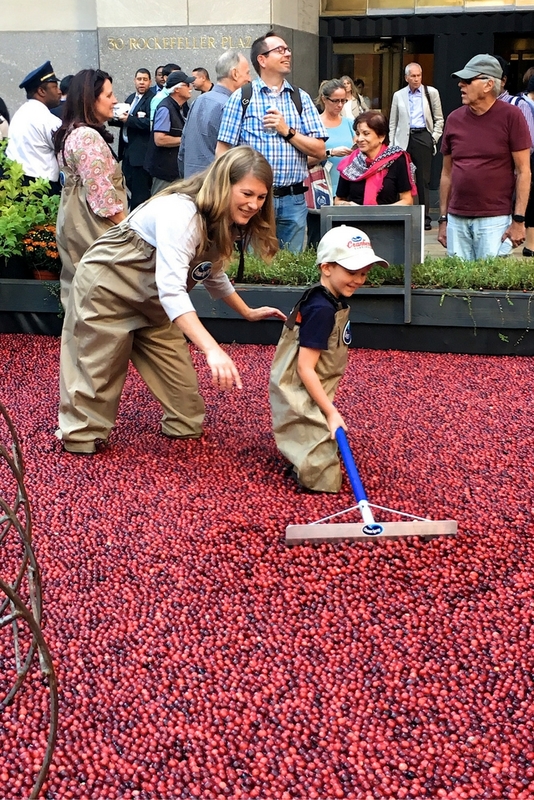 What you can’t hear in this picture is us have an in depth discussion as to weather it was better to pull or push the cranberries. He was a pusher and I was a puller. Neither of us had done this before and we both thought we were right.

Be sure to check out The Most Beautiful Harvest part of this post to see how the true professionals harvest and push/pull the cranberries. 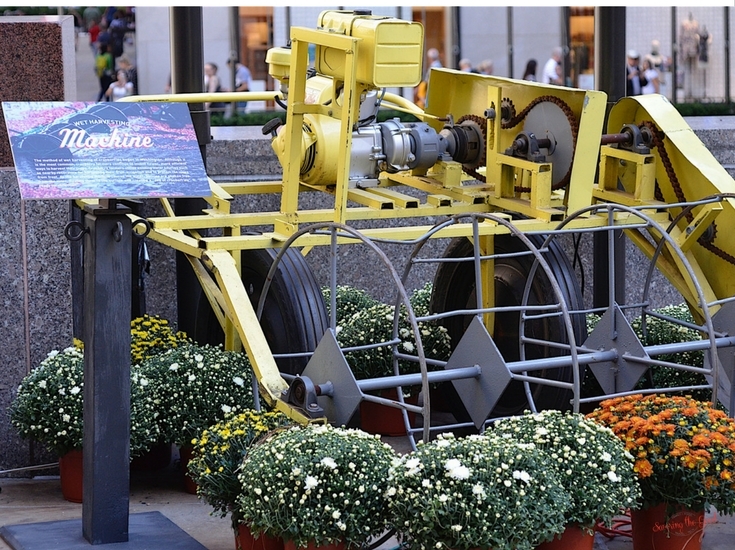 Chile – Unlike North American cranberries, the Chilean harvest takes place between March and May, providing a counter-seasonal supply of cranberries.

New Jersey – Home to more than 2,600 acres of cranberry bogs and Thomas Darlington, the inventor of the first dry harvesting machine, the Darlington Picker.

Washington – Because of the longer growing season on the Pacific Coast, berries from Washington are darker in color. 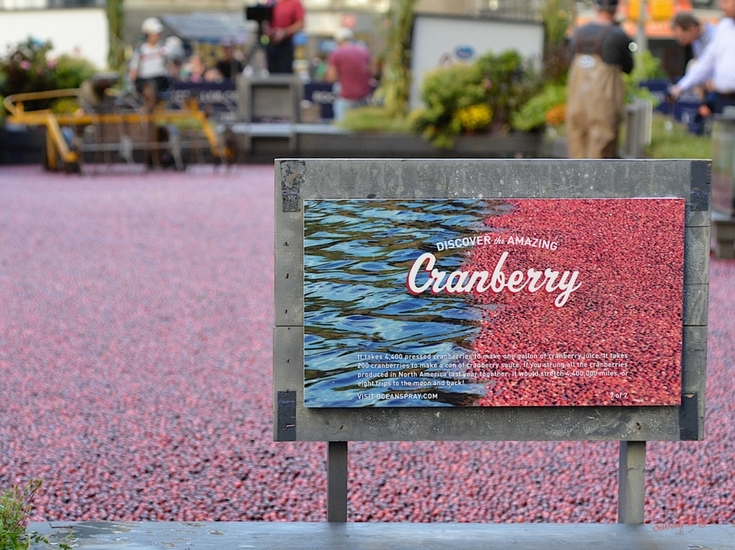 I LOVE Numbers. The Amazing Cranberry By The Numbers

5,062,500 ~ Gallons of jellied cranberry sauce Americans consume every holiday season.Ocean Spray® produces one can of cranberry sauce per family per year on average – that’s more than 70 million cans!

120,000 ~ Number of people who call theOcean Spray® Consumer Helpline each year for recipe ideas, product information and brochures. The most popular question? “Why won’t my cranberry sauce gel?”

4,400 ~ Number of pressed cranberries it takes to make one gallon of cranberry juice.

76% ~ Percentage of Americans who serve store-bought cranberry sauce at their Thanksgiving meals versus homemade sauce.

4,400,000 ~ Miles a garland would stretch if you strung all the cranberries produced in North America last year together. That’s eight trips to the moon and back!

8 ~ Towns in the U.S. that are named “Cranberry” or some variation of the name. 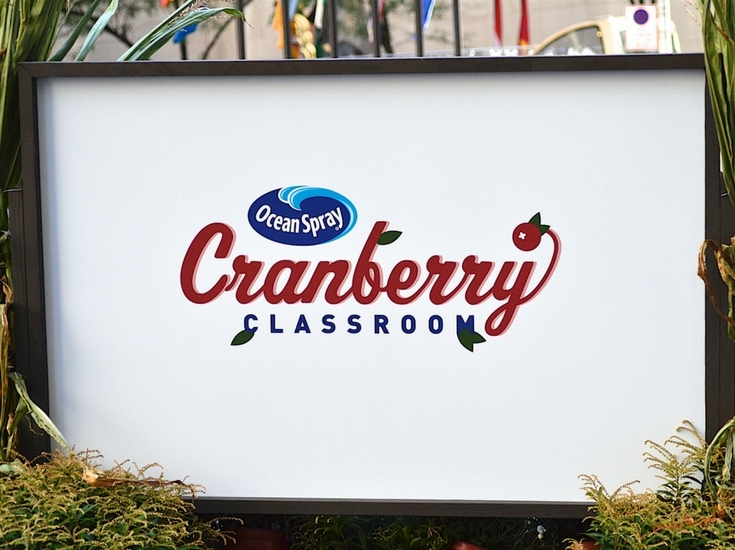 We were divided into four groups and they kids all got to have a brief lesson and interaction with the teacher. They went over the history of the the cultivated cranberry. This year marks the bicentennial of the first cultivated cranberry harvest and I was fascinated by all the facts. 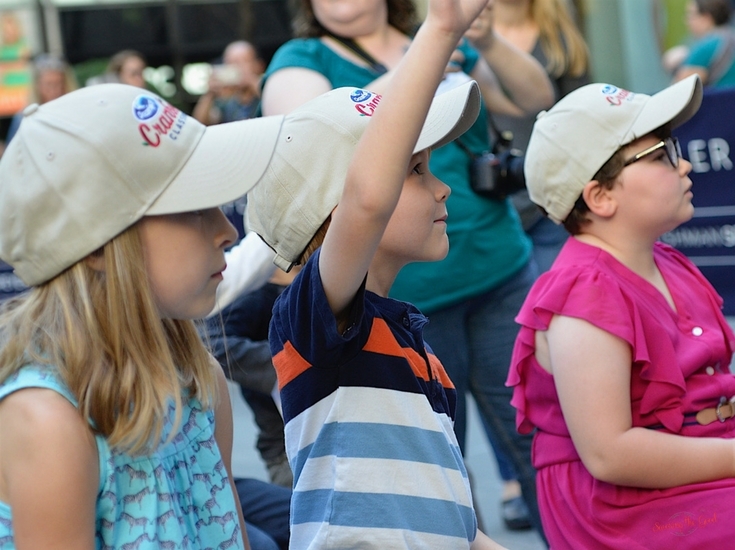 The kids listened intently and had fun being able to place items on a timeline. They covered a lot of information in a short amount of time and I was impressed at how well the kids retained the information. I know I learned more about cranberries in those 15 minutes than I have in my adult life.

If you want to catch up with the class here are some notes on what you missed:

11,700 years ago ~ Bogs are formed – Scientists discovered that bogs were made by glacial deposits thousands of years ago. Many bogs began as ponds and small lakes called kettle holes that were created when glaciers began to separate from one another.

1550~ Earliest reference to Native Americans using cranberries in New England – Native Americans ate cranberries on their own, baked into bread or combined with fat and ground venison to create pemmican to eat on long journeys. They also believed cranberries had medicinal properties and were used to dye rugs and blankets.

1620 ~ The cranberry is named – The cranberry gets its name from Dutch and German settlers, who called it “crane berry.” When the vines bloom in the late spring and the flowers’ light pink petals twist back, they have a resemblance to the head and bill of a crane. Over time, the name was shortened to cranberry. 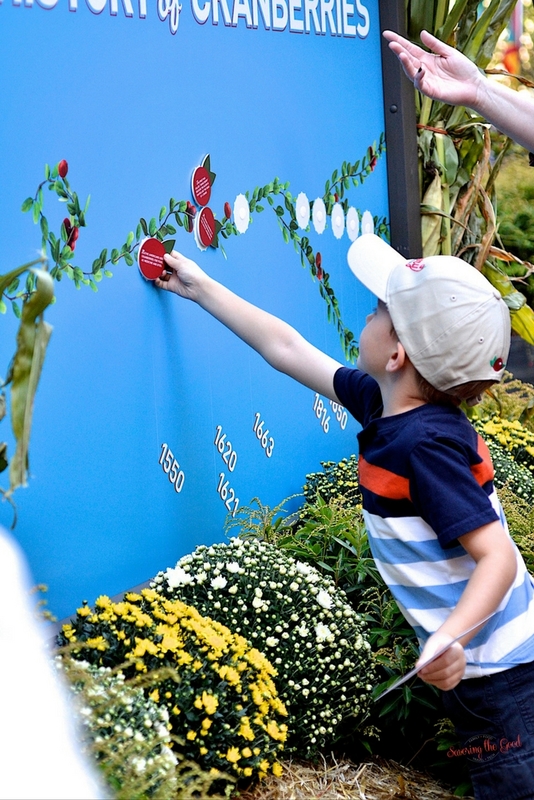 1621 ~ Pilgrims learn to use cranberries from the Native Americans – Legend has it that cranberries were served at the first Thanksgiving along with wild turkey, beans, and corn. 1663 ~ The secret of sauce – A recipe for cranberry sauce is featured in the Pilgrim Cookbook of 1663. 1816 ~ The wild berry is tamed – The first commercially grown cranberries were cultivated in Dennis, Mass., after Captain Henry Hall observed that wild cranberries produced more fruit when sand blew onto the vines. Today, his original bogs are still in production and sanding is an industry-wide practice. 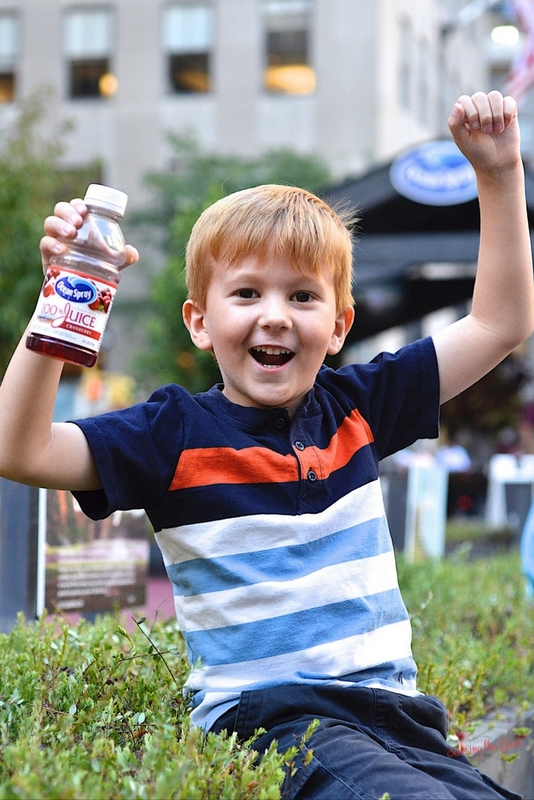 1850 ~ Vitamin C on the high seas – During the days of wooden ships and iron men, American vessels carried cranberries. Just as the English loved limes, American sailors craved cranberries. It was the cranberry’s generous supply of vitamin C that prevented scurvy. 1900’s ~ Careers in cranberries – During the early 1900’s many immigrants came to American in search of greater economic opportunity. The rapidly growing cranberry industry provided just that for the Finns, Cape Verdeans, Italians and Native Americans. Many descendants of these early laborers now run their own cranberry businesses. 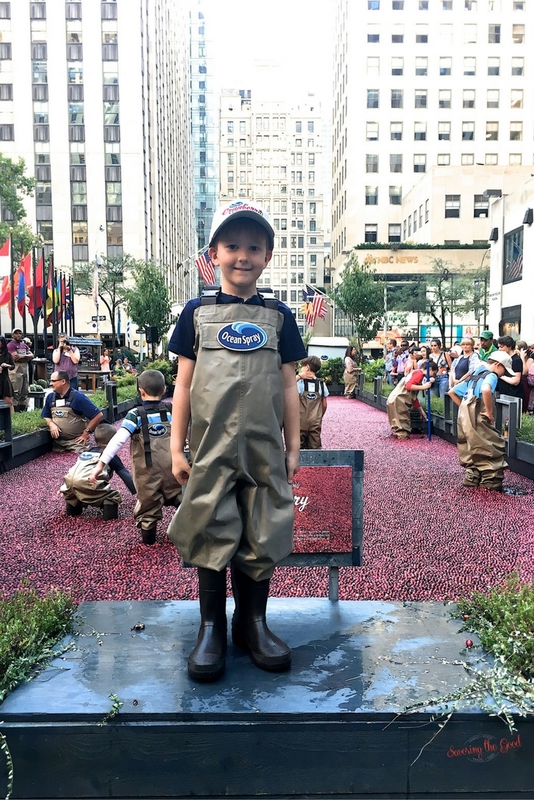 1912 ~ Commercial cranberry sauce is created – Marcus Urann, one of the founders of Ocean Spray invented cranberry sauce in 1912. 1940’s ~ Canning innovation – Canned cranberry sauce played an important role in the initial canned food movement in the 1940’s. During World War II, many canned food products were developed for military use, as they could be stored for long periods of time and were easy to prepare and eat on the battle field. 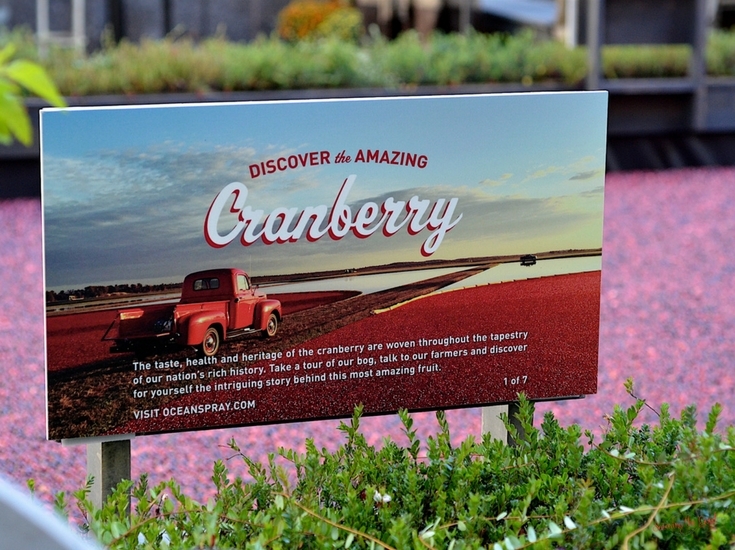 The Most Beautiful Harvest 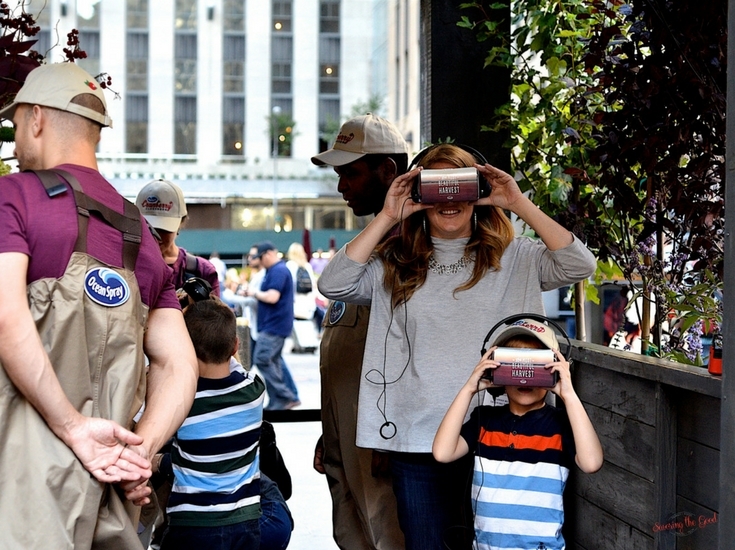 If you have a set of Google Cardboard glasses (or learn how to get or make your own set here) you can log onto www.OSharvest.com to experience The Most Beautiful Harvest for yourself.

Don’t have the Google Cardboard?

Just click on the browser-friendly 360 degree experience. When the video tells you to take control of the camera, use your mouse or arrows to move the camera in any direction. It is like using the Google Cardboard, with out moving your head as you would with the cardboard.

It is a BEAUTIFUL experience either way. 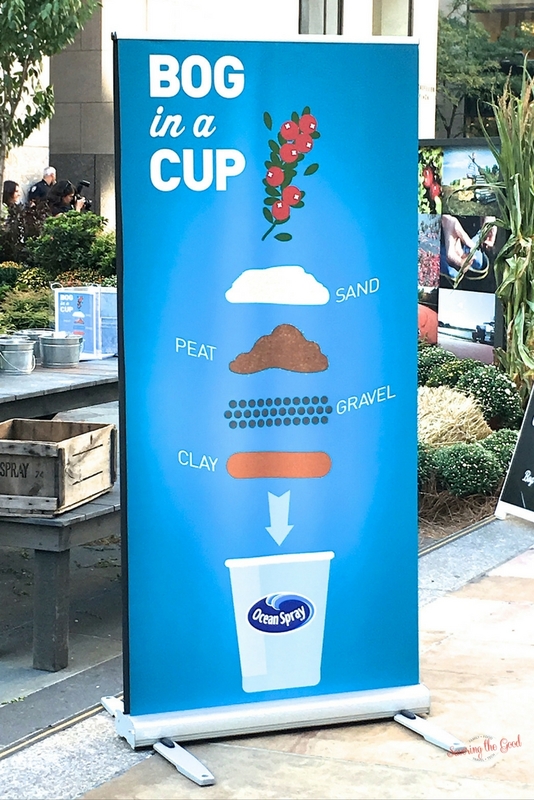 Bog In A Cup

The kids had a great time creating a bog in a cup! This hands on learning experience gave them first hand knowledge of what it takes to propagate a cranberry vine. 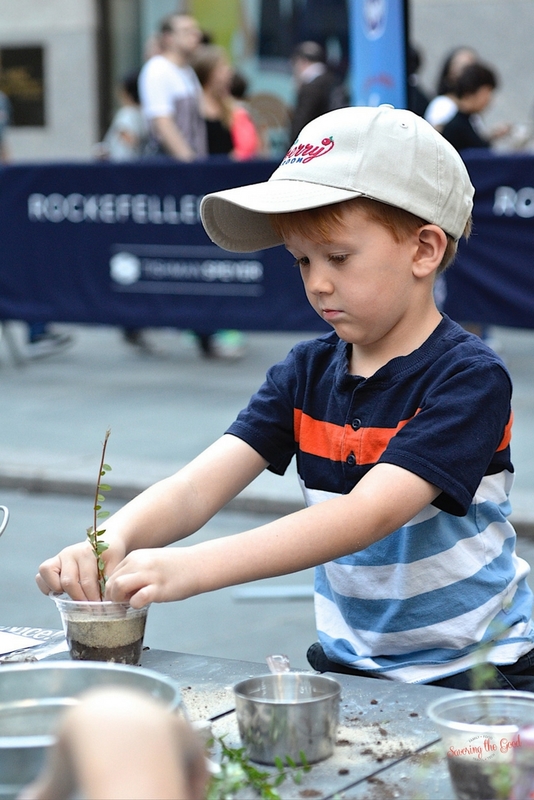 In chatting with one of the farmers I asked him how often do they replant the vines. He told me that an aggressive farmer will replant every 25 years. There is no need to replant each year like I have to replant my tomato and pepper plants. The only reason to replant would be to start a new variety that had been developed as a hybrid or to refresh a section of the bog that had been taken over by disease. He told me that some of his vines are over 200 years old! Now THAT is a heritage crop!